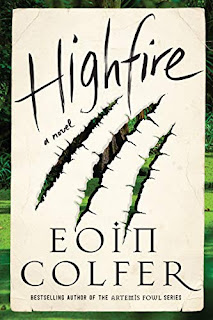 Don't think that just because this book is written by the same author as Artemis Fowl, or that this book is about a dragon, that it's a kid's book. It's not. There's too many bloody body parts, explosions, and talk of balls for that. But, it is a book about a dragon, and it's so much fun to read.

Vern, aka Lord Highfire, may be the last dragon alive. To ensure his survival, he's holed up in a Louisiana bayou where he can avoid detection and binge-watch as much Netflix as he wants. Did I also mention his love of vodka?

Vern has the ultimate chill shack, but he's pretty much alone. He might even be a little depressed. Either way, he's totally unprepared when his world goes pear-shaped.

When Vern's uniquely-gifted familiar needs a break, the one thing happens that Vern swore never would -- he's relying on an actual human for help. Teenaged Squib works hard for Mr. Vern, only putting his foot in his mouth about once per visit. They're not a stereotypical odd couple, but they definitely don't hit it off right away. Squib also comes with this own baggage, which complicates things quickly. Squib is the sole witness to the local, dirty constable getting into some serious law breaking. Being suspected by the crooked cop doesn't make you the safest choice to work, in secret, with a dragon.

The relationship between Vern and Squib grows. The devotion they feel toward each other eventually saves them when rouge Constable Hooke discovers them. Hooke doesn't want a dragon interfering with this criminal activities along the bayou. He'll stop at nothing to win. It's a ruthless and bloody battle for survival, tinged with crocs and fire, explosions and bullets. It's amazing how resilient both humans and dragons can be. It's also intense and fun to see them go at each other.

I really did enjoy this book. I needed something light and fantastical, but Colfer does an amazing job of keeping things rooted in reality. He took a crime story and inserted a dragon rather than going the other way around. You could almost picture Vern, walking about only a little taller than a human, in cargo shorts and a Flashdance t-shirt, trying to keep his wings neatly folded for discretion. Each character is clearly painted and styled in a way that propels the story forward and keeps you interested as a reader. This is a great, light book. 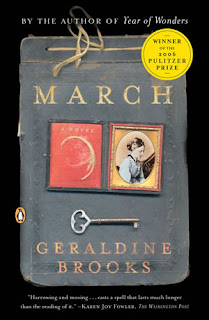 I have to start this review by saying this is a very well-written book. I loved how fully developed all the characters were as well as the turns the story took. We see iconic characters with flaws, and that's often what makes them more interesting. Maybe, what I don't like, which I'll get into, is purely circumstantial to the time period. Maybe the things that bug me about these versions of the Marches were inevitable based on the setting. Who's to say.

I will tell you that I wanted to love this story like I love Little Women. I wanted to feel on equal footing with this portion of the March family's story as I did when Alcott wrote about them.

There was something about March I couldn't get passed to like him. We meet him after he's been deployed as a chaplain in the Civil War. Through his letters home, and his reveries, we learn about his youth, how he starts out in the world, and his eventual meeting of Marmee. Surrounded by the Concord elite like Emerson and Thoreau, March's life begins rather well. One bad investments sends him into poverty and the situation the family is in throughout Little Women. March then volunteers to go into the war. He's too old to really be a soldier, but he wants to go to be there for the boys. His experiences while in the service eventually become his torment.

Meanwhile, we also get to see a more youthful version of Marmee. Her determined devotion to what's right, her nose for injustice, and her hot temper are on full display. It's this last trait that March strives to get under control after they marry, and it's all around awkward. She doesn't strike me as a character willing to be controlled, and March doesn't seem like the kind of guy to lean so strongly into convention. But, he does, and it's weird.

Additionally, there's Grace. She's the only other prominent character throughout the book. She's a domestic slave, raised within the home of a wealthy Southerner. March comes into contact with her multiple times in the story. She always seems to know more than everyone else, to push situations to the right outcome. She's the reality of the time period, but it was almost too convenient to wrap all that up within a single person.

Characters aside, this book touches on the horror of slavery and the Civil War beautifully. By making it small, focusing on one person in one spot, emotions feel heightened. The reader feels connected. The pain is more clearly felt. It was powerful, and I loved that aspect of the story. This was such a tragic period in history for so many reasons, and Little Women always glossed over it since that story took place away from the war. Giving the March family this added dimension was good.

I'm honestly on the fence about this book. I did like parts of it, but its downfall might have been that it used familiar characters, making it harder to appreciate for what it was. I do recommend this book, but for those who love Alcott, take it with a grain of salt. It's a different Marmee and an uncomfortable Mr. March.