The Ice Queen by Alice Hoffman

By far one of the most powerfully moving books I've ready in a while, The Ice Queen combines a captivating narrative style with a unique and emotional story that pulls the ready in and holds them rapt throughout the novel.

Our narrator has no name but she's a woman, sister, and lover. She believes her wishes can kill and she has closed her heart to all emotion. She is the ice queen...until she's struck by lightning. The strike deprives her of simple things she never knew she'd miss. This deprivation begins melting her heart of ice and she travels slowly back to place where it's okay to feel - both the good and the bad - where her wishes don't hurt anyone anymore.

The most interesting aspect of Hoffman's writing style in this books is the level of uncertainty it imbues. Say you don't believe in magic - you read this story and you just can't believe a person's wishes can have any real affect. There's enough reality laced within the magic of the story where it's entirely plausible to blame circumstantial evidence on our narrator's delusions. Yet, there's a lot a lot of magic just sitting throughout the story for those with a more mystical mind to grab. Hoffman never tells you which it really is; the choice is up to you. Truth is, fantastical things are out there and they don't have to have an explanation. You have to decide what you believe in, and it's nice to see this truth mirrored in the story.

Through death, love, loneliness, pain, pleasure, and the varied side effects of surviving a lightning strike, Hoffman weaves the tale of one woman's journey to learn how much basic things in life will be missed when you give them up and how great it feels once you allow them to return.

The Life and Times of the Thunderbolt Kid by Bill Bryson

This book is more than just a memoir of one person's life, it's an homage to a decade (the 1950's) and a place (Des Moines, IA) where life was simpler for the average kid and fun had to be searched out rather than watched on TV. Bryson focuses on the 1950's, his early childhood, by placing historical context around his personal anecdotes. Although too young at the time to really experience the significant historical moments of the 50's, Bryson reflects, as an adult, on events like the Cuban Missile Crisis as he tells us what Little Bill was up to at the same moment in time.

Throughout a slightly off-kilter childhood (as interpreted by the author,) Bryson assumes the alter ego of The Thunderbolt Kid. Inspired by an hold shirt discovered in his basement, The Thunderbolt Kid is capable of vaporizing his enemies with just a stare. The imaginative nature childhood Bill needed to create such a superhero is also prevalent in adult Bill's storytelling. Yes, his personal anecdotes are embellished - it's obvious that thinks like a boy's face getting smashed completely in by a basketball didn't actually happen - but in such a creative and descriptive way that the anecdotes don't lose their sense of reality.

Like all Bryson narratives, Life and Times is an extremely entertaining book that not only tells a story, but teaches the reader a dew things as well. Bryon's insight into his own childhood, Middle-America, and the history of a Communist-crazed decade all combine to paint a detailed pictures of a long-gone way of life. The simpler times of the 1950's have given way to so much flurried action and over-stimulation; it was refreshing to visit a time period unlike any I've personally known. It also felt good to laugh out loud at a book, which I did plenty. How can you not laugh about the jars young Bill would "toity" into in the kitchen because the bathroom was too far away? 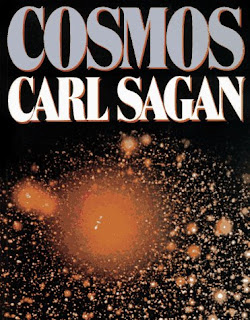 I've been aware of Carl Sagan for most of my adult life, but until I read 'Cosmos' I"ve never actually read anything that he's written. This was a huge oversight on my part. 'Cosmos' is one of those books that will change your entire perspective on humanity. I rank this book up there with Bill Bryson's 'A Short History of Nearly Everything' and Stephen Hawking's 'A Brief History of Time' which are two of my favorite non-fiction books of all time.

'Cosmos' is a book about the universe, the history of human understanding of the universe, and speculation about humanity's place in the universe. These are very deep concepts, but Sagan approaches them in a way that is both accessible and inspiring. He talks about these concepts with a sense of awe and reverence that inspires wonder in the reader.

It's easy to feel overwhelmed when reading about the vastness of the universe; after all we're quite isolated over here in our arm of the Milky Way. We're floating through space on a ball of dust and we have no idea if anyone else is out there, but Sagan makes this intense isolation feel like it's just temporary; after all, we're only now taking our first steps into the universe. In 'Cosmos' Sagan demystifies the universe and our place in it for the average reader.

Carl Sagan has a deep respect for the human species and he has an amazing ability to make you feel impossibly important and incredibly insignificant at the same time. 'Cosmos' whet my appetite for more Sagan. This is a great book; definitely a must read for anyone interested in astronomy, but also a great book for anyone who likes to ponder things that are a little bigger than reality TV and celebrity gossip.
Posted by Trey No comments:

The Dracula Dossier by James Reese

The Dracula Dossier presents a possible reality where author Bram Stoker could have derived his inspiration for Dracula. It's a fictionalized reality full of historically accurate people, relationships, and events. A Gothic mystery complete with ancient Egyptian deities, animal sacrifices, possession, and murder.

The story is told through letters, newspaper clippings, and Bram Stoker's journal. All three elements nicely combine to present a complete record of events for the reader. Stoker takes great pains to use his journal as a place to record events as they were witnessed rather than incorporate a lot of personal observations and speculations. Because of this, the reader can feel like their getting an account of something that actually happened (which it could have) rather than a story.

The initial motive of the book is to open a window into the life of Bram Stoker. We learn of him through his own words and actions. We meet his family and his closest of friends. We get to see what his day job in the theater was like. Reese, however, inserts a secondary story by setting this window up against the murderous escapades of Jack the Ripper. What if Bram Stoker was somehow involved in that great mystery? What if he played a role in Jack the Ripper's own tale? So little is known about what actually happened during these murders, that the time period is ideal for speculation. Jack the Ripper could have tormented people beyond those he murdered - and Bram Stoker could have easily come into contact with such an insane murder.

I found this story engaging and fully-developed. All the characters felt as real in this scenario as they would in their own autobiographies (and they almost all existed.) Using real events and real people to generate a fictionalized story about what might have happened during a famous time in London's history brings this period to life in an extremely tangible way while treating the reader to "inside" information about a well-known author. The Dracula Dossier is a suspenseful novel much like an adventure of Sherlock Holmes' only Reese never disproves the fantastic with science, leaving the reader to decide on their own what might have really happened.


Posted by Gsquared No comments: