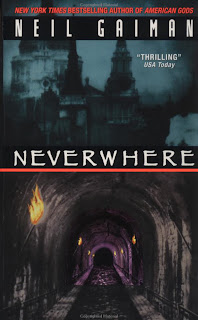 I've never read a Neil Gaiman book I didn't like, and Neverwhere is no exception. Neverwhere is based on a TV show that was developed by Neil Gaiman and Lenny Henry in 1996. It was later adapted to book form by Mr. Gaiman, and it is well worth reading.

The story focuses on a rather average man named Richard Mayhew, who stumbles into a different world one night when he decides to help a young girl he finds bleeding on the streets of London. The girl he meets is a magical being from London Below a world that exists with and below London itself (or London Above). London Below catches people who fall through the cracks of the regular world, in addition, this fantastical world is also inhabited by a number of magical animals, medieval monks, beasts, monsters, and even angels.

Richard's chance encounter with the bleeding young girl from London Below pulls him out of his normal life to such a degree that he can no longer interact with people from London Above. Trying desperately to restore his status as a member of London, Richard heads into London Below and gets embroiled in a conflict that involves two terrifyingly brutal hit-men, magical rats, the fall of Atlantis, and even an attack on heaven.

Gaiman's characters are described in ways that make them laughable and lovable and the world he supplants below (and above, and within) London is amazingly vivid and exciting. I couldn't put this book down, and while I always hate to see a book end, being a fan of long form fiction and fantasy, this ending was wholly satisfying. I would recommend this book to anyone, fan of fantasy or not.

Now, a word on the fact that this book is based on a TV series. Before reading this book I had no idea that it was a series on the BBC in '96. For that fact, I am glad. I checked out some of the series on youtube, and was underwhelmed to say the least. You can see for yourself here. The acting is very good; specifically the Marquis de carabas is not at all what I envisioned, but is perfect none the less. Despite the acting, I can't get past the look of the show. It's just looks rather cheap to me. I feel like Gaiman's writing deserves a better look. Something more polished with a keener eye for production design. I'm not saying it needs the Hollywood treatment, but the book I read was much bigger and more beautiful than the clips of the show I watched. I often like to see screen adaptations of books that I have read, but this is one instance where I'm rather glad to remain ignorant and content to enjoy only what Gaiman describes in his pages, not what aired on the BBC.
Posted by Trey 1 comment:

Book 2 of the Sookie Stackhouse series contains more exciting, fast-paced bursts of action than Dead Until Dark. While the writing is still the same (Sookie over-explains things a lot) the plot is more dynamic.
Sookie has two mysteries to solve in this volume of the series. The first requires her to travel to Dallas to locate the local vampire sheriff who has gone missing. Her visit to Dallas also includes our first run-in with the Fellowship of the Sun, a "religious" cult bent on eliminating vampires completely. Through two failed attempts to kidnap and kill Sookie, betrayals, a car accident, a trip to the hospital, and the discovery of another mind-reader and shape-shifter, Sookie rescues the sheriff from the church and manages to make it back home.
The second mystery is back in Bon Temps. Lafayette has been murdered and Sookie is determined to find out whodunit and why. The trail of clues leads Sookie to a swingers party with Eric, portraying a gay vampire, attends as her "date." Sookie solves the mystery, but not before facing a tense confrontation with the maenad that has been roaming the woods. For all the action, the mysteries are solved rather quickly (and have pretty obvious resolutions.)

I'm now taking a break from the Sookie Stackhouse series, but have four more books from the series sitting on my shelf so stay tuned. I think two at a time is about all I can handle before I need to read something with a little more intellectual substance to it. We'll continue to meet more supernatural creatures and see what it's like for them, being different in today's society (a storyline I really do like) when I eventually go back into Sookie's world.

Dead Until Dark by Charlaine Harris

If you've managed to get into True Blood, the HBO series, and want your immersion into the world of Sookie Stackhouse to be complete, this book (the first in a long series) may be for you.

The series follows our heroine, Sookie - a mind-reader from Bon Temps, LA - as she solves mysteries and struggles with the issues involved with dating a vampire. In Sookie's reality, vampires have come "out of the coffin" and exist in the open. Some attempt to "mainstream" and live among humans while others remain in the shadows behaving more like the devilish blood-suckers vampires are typically portrayed as. Dead Until Dark focuses on the mystery surrounding a serial killer going after women who are comfortable interacting with vampires. After multiple women get killed in the small town, the killer turns his attention to Sookie. Her vampire boyfriend, Bill, strives to protect her, but his abilities are limited to the night. During the day, it's up to Sookie to protect her self.

This book (along with the rest of the series, I'm sure) is pure escapist, pretty sexy, somewhat gory reading. Don't go into it expecting much more than to just be entertained, mostly. Some of the story is a little trite (a certain long-dead musician makes a vampire cameo that it totally unnecessary) and our narrator, Sookie, has a tendency to over-explain things at times. The writing does read quickly and creates an alternate and believable reality where vampires, humans, and a few other "special" folk live together.

If about an hour per week is all you need for your vampire fix, skip the books and watch the series on HBO, it's fantastic!
Posted by Gsquared 2 comments: 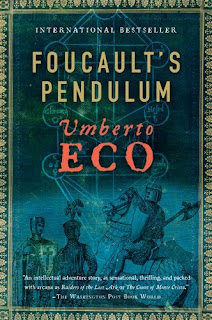 I'm a huge fan of dense books, and Foucault's Pendulum is definitely a dense book.

There are many parts of this book that I enjoyed; The historical facts are communicated to the reader in a fascinating way, the humor is very high-brow, and getting the jokes made me feel smart. I loved the characters, and enjoyed the way that they interact with each other.

That being said, I really wouldn't recommend this book. There are long sections of book that are ultimately pointless, and quite boring. In the end, the book becomes almost tedious. The middle 300 pages of the book are really nothing more than the three main characters talking to each other in their office. Granted they often have interesting, intelligent, and humorous discussions, but at the core, it's just three acedemic types sitting around goofing off and coming up with crazy theories.

This is the first book I've read by Eco, and I've heard it's not his most accessible. People have told me that The Name of the Rose is a masterwork, and I can see the brilliance in Eco's storytelling, but this book just didn't do it for me, and it's not something I would recommend to anyone who wasn't already fascinated by the templars and all the conspiracy theories that surround them.

Perhaps I would feel different if this book hadn't taken me 4 months to read. I just had trouble picking it up, and in my opinion if I'm not excited pick up a book and read it, it's not worth reading again, or recommending.
Posted by Trey No comments: