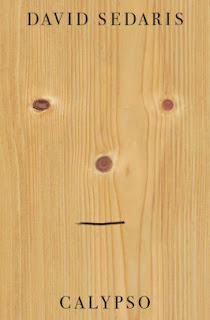 As a person, I love Sedaris' quirkiness and the ability he has to tell a really emotional story between the lines of his overly-comfortable-with-each-other family. He capitalizes on the sentiment of the old journalism lesson: Nobody wants to read a story about a dog biting the mailman, but if the mailman bites the dog, that's news!

Sedaris takes emotions we all feel -- loss, fear of aging, family strife, mental illness, obsession -- and wraps it up in a package of unconventional elements and silly sibling banter for truly entertaining tales.

Almost all of the stories in Calypso happen in, or include a visit to, Sedaris' vacation home. Aptly named the Sea Section, it's located on the Emerald Isle in North Carolina. It serves as a meeting place for his family since they've all spread out across the globe. Sedaris' homebase is in England. All of the stories illicit a smile or two, but my favorites revolve around the obsession contrived by the desire to please your FitBit and the idea that you could feed a benign tumor to a snapping turtle.

The most touching element to the stories in this book is Sedaris' kindness. You can see it throughout his stories as he picks up trash in his hometown, buys a second home large enough for his entire family, interacts with fans while on tour, and cares for a wild fox, even though he's been told not to by his partner, Hugh. While the kindness isn't all-encompassing, Sedaris is vulnerable enough to show you where he might have slipped up, where he took the easier route of being cruel when maybe he didn't need to be, but more so there is his kind heart.

I don't really laugh when I read Sedaris. Classified as humor, his stories make me smile. They make me happy as I find the common thread that connects his experiences to my life, and that someone could tell that commonality in such an entertaining way. I don't think he's for everyone, but I do think he's worth a read if only to realize we all go through it, it's always awkward, and you're not the only one not totally comfortable in your life.
Posted by Gsquared No comments: 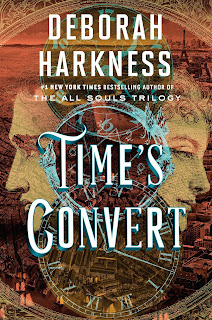 This is the fourth book, connected to an amazing series -- The All Souls Trilogy.


They've even turned it into a TV series, named, I think, after the first book. I'd be watching it if it wasn't on yet another, separate, streaming service. Anyway, start with A Discovery of Witches and go through the original trilogy. They're each better than Time's Convert. You also won't know who anyone is in this book without getting to know the characters within the other novels.

That being said, when you finish the trilogy, don't feel compelled to move on to this volume. It's disappointing because absolutely nothing happens. All the dire action and tense moments you have come to expect are absent. Instead, Time's Convert gives you a heavily-detailed account of one vampire transformation coupled with a robust history lesson in revolution. It's interesting. I liked the history. I liked learning the backstory of Marcus, a vampire with a central role in the first three books. There's also a little added insight into the lives of the main characters we previously followed -- a powerful witch and a really old vampire, but we're up in everyone's heads too much. And, nothing is happening! All the rash behavior, desperation, and fearful worry about the future is heavily muted by quick, benign defiance that's honestly a little boring.

As Marcus waits for his future vampire-mate Phoebe to move through the infancy stage of converting to a vampire, he shares his history. It's not something vampires often tell, opting to keep the details of their living lives to themselves. Marcus' warmblooded life began amid the American Revolution where his natural calling in medicine served a great many soldiers. His history also has dark moments though. Beginning with a horrible, but necessary act while alive, his story as a young vampire moves through moments of great passion, to youthful rashness, to sadness. Throughout the telling of his tale, Marcus struggles with being separated from his mate, who's having her own trouble adjusting to her new life. You'd never think of all the complications the conversion can create for a person.

Watching over both Marcus and Phoebe are members of the De Clermont family, which include Matthew and his witchy wife Diana, busy with their twin children. Experiencing their own growing pains of sorts, Diana and Matthew struggle with the best way to raise their children, who are exhibiting special gifts of their own, some not so easy to control.

I highly enjoy this world as a whole and really love the deep historical dives Harkness takes in her books. You can feel her settings as if you're there, no matter what era or country the characters are in, but that doesn't replace action. I just needed a little more.
Posted by Gsquared No comments: