Dead as a Doornail by Charlaine Harris

I started this book with the intent to have an easy read before giving birth. I was usually uncomfortable at night and Dead as a Doornail didn't require a lot of concentration. Olivia came early though, so this book has been filling the small gaps of free time in my sleep-deprived, new-mommy life. Again, it has been a big perk that the story requires minimal brain power to get through. I'm starting to appreciate this series more and more for the mindless fodder it is. If I go into each book without any quality expectations I can enjoy them for the fun, fast reads they are.
Large errors still bother me though, like this one on pages 53-54 where a detective goes to Sookie's house to poke around while Sookie is at work, then heads to Merlotte's to talk to Sookie in person where Sookie gives the detective directions to her house for an interview they set up to take place the next day. The detective tells Sookie she was at her house, she doesn't need directions. DETAILS. Errors like this make the series feel mass produced and I'd like to think the author takes pride in her work no matter what. Mistakes and oversights like this say otherwise.
Dead as a Doornail keeps Sookie very busy once again. There's a serial killer out hunting shape shifters and people think it's Jason. Sookie to the investigative rescue. Meanwhile, someone is trying to kill Sookie and burns 1/2 her house down in a failed attempt to end her life. All the supernatural males in the book want to sleep with Sookie, which is a lot to deal with for a girl just trying to stay alive. Vampires are mad at her for butting into their business and werewolves are using her telepathy for their own purposes which just forces her into yet more uncomfortable and dangerous situations. She gets shot, beaten up, nearly killed twice, and cracks a rib just going about her everyday life.
The stories seem to get more disjointed and convoluted as the series goes on, almost as if Harris is attempting to include all the characters previously introduced as important in each book while adding new ones. It's getting crowded and not adding any substance to the plot line for sure.
Sookie is also becoming a less appealing narrator as the series continues. She's just not smart enough to be our narrator anymore. The events she's witnessing are too intricate for her to process in a way that gives the reader all the information they want. For example, the reader learns more about the intricacies of the Shreveport wolf pack in this book and gets a glimpse of the cutthroat politics the govern the group. Sookie's observations focus more on her aversion to two wolves fighting each other than the subtleties that lead to the election of a new pack leader.
I only have one more book in the series to read before I have to decide if I want to buy more of them. I think Sookie Stackhouse is going to take a back seat for now. I'd rather be reading Dr. Seuss to Olivia.
Posted by Gsquared No comments: 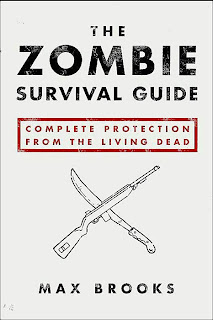 I'm a fan of Zombie Mythology. I'll pretty much watch anything zombie-related that comes on late-night cable. But I'm picky when it comes to Zombie stories. I HATE cheesy zombie stories. Some of my favorites include; the original Night of the Living Dead, The Walking Dead(comic series) and 28 Days Later. Max Brook's book is now on my list of some of the best Zombie Mythology out there. This book doesn't just add to the mythology, it actually creates a full history of the mythology, tracing it back to the beginning of humans, and even establishes the cause of Zombies...

Before reading this book you have to take a logical leap. This book is not about our world, this book is about a world, just like ours, except Zombies exist and have existed as long as mankind has. If you can willingly take that leap, which not everyone can, this book is a joy to read for any fan of the walking dead.

The book is split into two parts. The survival guide, and a chronological listing of every traceable historical zombie attack. I really like the way Brooks approaches the concept of Zombies. He attributes zombieism to a virus called Solanum which is spread through body-fluid contact. Once it enters the body, it travels to the brain where it begins to multiply, eventually killing it's host and turning the brain into an entirely new Solanum-controlled organ which hijacks the human body and uses it as a tool to spread itself to other humans by giving the body an uncontrollable urge to bite other humans.

After setting up what causes zombies, Brooks launches into a categorical breakdown of all the methods of eliminating them, going into great detail as to what weapons are best and which are worst, how to defend yourself and your home against a zombie attack, how to move from place to place, how to eliminate zombies from your environment, and how to plan for survival in a world where Zombies outnumber humans as the dominant life form on earth.

What really worked for me about this book was how seriously the author treated his content. It's very easy to look at a book about Zombies and laugh it off as cheesy horror fiction, but Brooks keeps a straight face the entire time. Even to the point of supplying multiple lists of equipment to keep on hand, descriptions of which weapons would be best used to eliminate zombies in different enviroments, and how to survive when on on the run from Zombies from the hordes of undead ghouls.

The second part of the book is a little less practical, a little less of a guide and a little more like a history lesson. Brooks takes the reader on a journey from the very first zombie outbreaks near the dawn of man all the way up through the modern attempts by nations to weaponize zombies and use them against other countries. These accounts of zombies throughout history are really fun to read and play out like a history book devoted to Zombies.

This book is a must-read for anyone who is into Zombies. For those who aren't into zombie mythology, this book will be a complete drag.
Posted by Trey 1 comment: