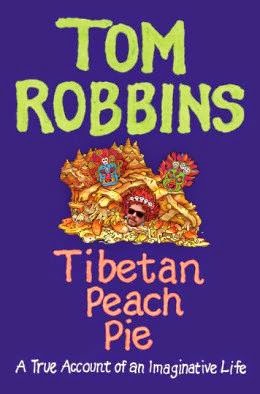 I absolutely love Tom Robbins as an author. I've read most of his books and liked just about every one. Skinny Legs and All is probably in my Top 10, so I was excited that a memoir was coming out. Robbins is a quirky writer so I assumed his life was going to be interesting and that he would tell good stories about himself. Eh, it was sort of true.

Overall, this was disappointing. There was no real flow beyond some vague chronology and the stories Robbins selected to share weren't always interesting. He definitely didn't paint a cohesive picture of himself - nothing 3D - other than that he likes women, art, food, and traveling. He had some serious relationships, a few kids, and a life off the straight and narrow. I didn't finish the book feeling like I knew who Tom Robbins was (maybe that was the point?) I feel a little like I wasted my time.

He hardly talks about his books, his creative process, his inspirations. I only know that he, like me, writes things out long-hand first (and I really liked that) but I wanted more.

Don't let this be your introduction to this guy. Get to know his writing first before you attempt this one - trust me.

Check out reviews on other Tom Robbins books:

The Book of Life by Deborah Harkness 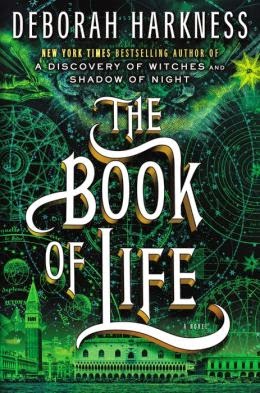 You see it all the time - a trilogy starts off super strong and drags you into its world. Then the second book spends a lot of time explaining the plot so you finish it a little less enthusiastic. By the time you finish the third installment, you're disappointed at how it all ended.

This trilogy doesn't do that!
No disappointments here as the third book in Harkness' All Souls Trilogy wraps up. This was an amazing collection of books - intelligent and exciting with real three-dimensional characters. I absolutely loved it.

In the third installment, our main character base has broadened considerably. Diana, a witch, and Matthew, a vampire, are no longer the only characters we're worried about. Yes, they still propel the action, more so now that Diana is pregnant with Matthew's twins and they're both breaking the single most important rule of no intermingling between creatures. Plus, there's the blood rage - a severe, chromosomal sickness in vampires that can be passed along when turning a human into a vampire. This disease causes the infected to simply lose control and become a violent, murdering machine. It can be managed but it isn't easy. So, with all these black marks against the couple, family is more important than ever. They will protect the couple and the babies. They will help get answers to the question that started this whole series off when Diana discovered a book, magically hidden in a library, that contains the origins of all creatures. Everyone is after the book, people are killing for it, but Diana needs it now more than ever to protect her children, her family, and save Matthew from blood rage.

What's so unique about these books is the history and science fused into the supernatural. Yes, there's magic and vampires and all the strange things that go along with characters like that, but there is also academia. A huge part of all three books take place among books, in libraries, and on college campuses. It gives the story some plausibility because it goes beyond the fantastic and roots the existence of these creatures in the real world. The idea of these character traits being rooted in DNA, something that can be studied, is fascinating.

There's also the concept of family at the center of the story. It's everything and that's a message you don't often get. The vampiric family structure is very important and strong. Vampires must adhere to the responsibilities of the family hierarchy and everything is done in a certain, proper way. Diana and her family of witches is brought into this structure and must adapt. They blended family they all become and their devotion to each other compliments the rough action and tense moments perfectly.

Another great thing about this trilogy is how it ends. The third book keeps our characters going on their initial quest, but adds in an additional element - a rogue vampire - to create new tension and fear and to propel the characters into a new direction. I like that Harkness held something back until the third book so we'd have something new.

So many series I've been reading over the last few years are coming to a close in the next few months. It's always hard to let a story go, but this one went out in such a perfect way that I'm not sad to be done.

Start at the beginning and read my review of A Discovery of Witches then check out book #2, Shadow of Night.
Posted by Gsquared No comments: