The Globe: The Science of Discworld II by Terry Pratchett 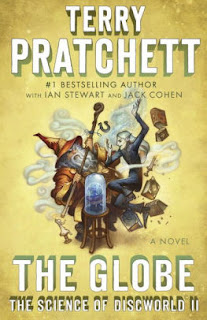 Thinking this book was going to further expand on our planet's evolutionary history -- from the title -- I dived into the second volume in this comical/scientific series.


That's totally not what it's about.

On the fun, fictional side of things, the Discworld wizards have come to Earth to prevent an invasion of elves from essentially taking over the minds of humanity as we develop as a species. We're talking centuries ago, at the birth of man's ability to think creatively.

Scientifically and historically, this book studies humanity's dependence on narrative thought. Our innate desire to tell stories, to fixate on the stories of others, and how our ability to depict characters and events through stories has impacted our connection to the unknown.

The "globe" referenced in the title is in dedication to someone who Pratchett very clearly values as the pinnacle of creative thought...William Shakespeare. Transferring the unseen into real characters is deftly done in A Midsummer Night's Dream as fairies are given names and personalities. This tactic, the book speculates, demystifies the mystical to a point that they're no longer revered or feared; they no longer have the same power. It becomes the greatest weapon the magicians have against the elves. Their "real" power is essentially dumbed down to a flitting fairy of no consequence through Shakespeare's play, turning them into an ineffective foe regardless of what abilities they actually possess.

This fictional clash in creativity aside, the real concepts discussed in this book are fascinating. Are we really the Great Ape we've named ourselves or just the ones who've mastered storytelling? What impact on belief does putting a face to a name really have when talking about mystical, spiritual, or magical beings? How does humanity's obsession with stories alter our reality? Do we really seek truth or just the next piece of gossip?

I feel like I could talk about the topics in this book forever. They fully peak my interest as a creator of content and as a lover of stories. I would almost suggest skipping volume one, this book is that interesting, but then you'd miss the whole comical setup of Discworld's connection to ours. In true Pratchett style, it's pretty funny.

This second volume continues to recommend the series as a perfect companion set for all aficionados of the Discworld universe. Happy reading!

Read this first:
The Science of Discworld (Volume 1)
Posted by Gsquared No comments: